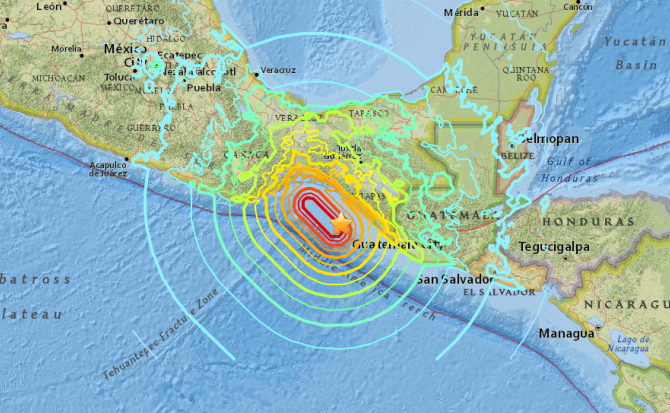 Buildings collapse and power cut for a million people as magnitude 8.1 quake made houses ‘move like chewing gum’

The strongest earthquake to hit Mexico in a century has left at least 35 people dead, toppling houses, damaging hospitals and government offices, and sparking mass evacuations. The magnitude 8.1 quake struck off the country’s southern Pacific coast, 100 miles (165km) west of the state of Chiapas just before midnight on Thursday local time. The governor of Oaxaca said at least 23 people were killed in his coastal state. Civil defence officials said at least 10 died in Chiapas and two others in the Gulf coast state of Tabasco.

Manuel Velasco, the governor of Chiapas, said three people had been killed in the San Cristóbal de las Casas municipality, including two women who died when a house and a wall collapsed. He called on people living near the coast to leave their houses as a protective measure.

“There is damage to hospitals that have lost energy,” he said. “Homes, schools and hospitals have been damaged.
The Tabasco governor, Arturo Núñez, said the two dead in his state were children. One died after a wall collapsed and the other, a baby, died in a children’s hospital after a power cut stopped electricity to its ventilator.

On Friday morning, Mexico’s president, Enrique Peña Nieto, tweeted: “Sadly, there are reports that people have died. My deepest condolences to their families.”

The president said at least a million people had been left without electricity after the quake, but power had since been restored to 800,000 of them. He urged people to be vigilant and to check gas supplies as well as walls and columns.

The US Geological Survey recorded at least 20 aftershocks of magnitude 4.0 or greater within about five hours after the main shake, and the president warned that a major aftershock as large as magnitude 7.2 could occur.

In a series of tweets, Peña Nieto said schools would be closed for the day in Mexico City, the state of Mexico, Chiapas, Hidalgo, Veracruz, Guerrero, Tabasco, Oaxaca, Puebla and Tlaxcala. He said the suspension of classes would allow experts to determine the damage to schools.

The Pacific tsunami warning centre said waves as high as three metres could strike the coast but the president sought to allay fears about huge waves rushing towards the coastline, telling the Televisa TV network: “The tsunami risk on the Chiapas coast does not represent a major risk. It’s not very big, it’s not a major worry.”

Rodrigo Soberanes, who lives near San Cristóbal de las Casas in Chiapas, told Associated Press his house had “moved like chewing gum” during the quake.

Reports suggested that a hotel in the south of the country was among the buildings that suffered severe damage, and rescuers were searching for trapped people.

The tsunami warning centre recorded initial waves a metre over tide level off the city of Salina Cruz. It predicted waves of between 30cm and a metre for the Cook Islands, Ecuador, El Salvador, Fiji, French Polynesia, Guatemala and Kiribati.

Guatemala’s president, Jimmy Morales, said he had reports of an unconfirmed death near the border with Mexico, in San Marcos state. “We have reports of some damage and the death of one person, even though we still don’t have details,” he said.

Lucy Jones, a seismologist in California who works with the US Geological Survey, said such a quake was to be expected. “Off the west coast of Mexico is what’s called the subduction zone: the Pacific plate is moving under the Mexican peninsula,” she said.

The Mexican seismological authority said the quake was 19km deep and triggered a series of magnitude 6 aftershocks.

“Chiapas is historically a very seismic state due to the interaction of five tectonic plates,” it said in a report on the earthquake. The state has suffered three tremors above magnitude 7 since 1970, including one on 7 November 2012 that measured 7.3.